All I kept doing was staring at the little curser blinking or repeatedly hitting the back space every time I attempted to write.

I have a million things that are heavy on my mind and I can’t seem to turn off the ‘my heads spinning’ switch, so I’m just going to jump from one thing to the next; bear with me.

Eli just finished having a week long 3rd birthday celebration! I still am having a hard time saying my baby boy is 3!! When people say, “Enjoy every second, they grow so fast” they aren’t kidding! Even though, Eli will always be my baby, he sure isn’t one anymore! He has recently found a love for Teenage Mutant Ninja Turtles (TMNT) and we eat, play and breathe of their awesomeness right now. So, I went a little cray pinning on Pinterest for a super duper, cool, cowabunga, ninja power, TMNT themed party. What baby wants, baby gets…just kidding. Only a little. Dammit! OK, I’m not kidding..I spoil my kid. Guilty! 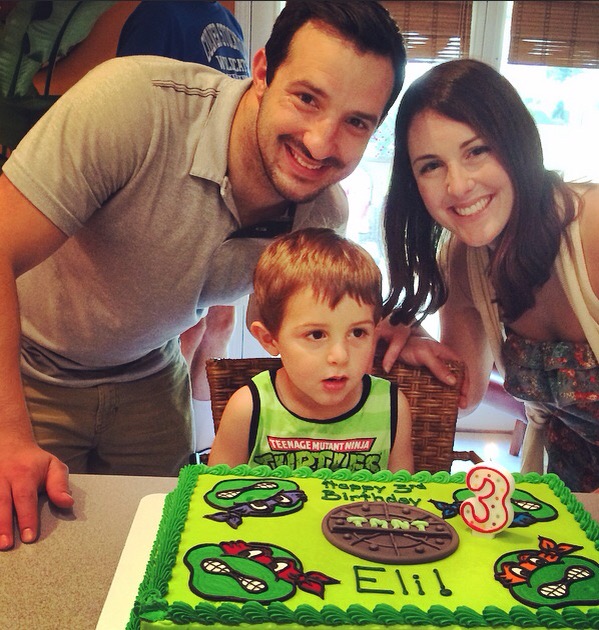 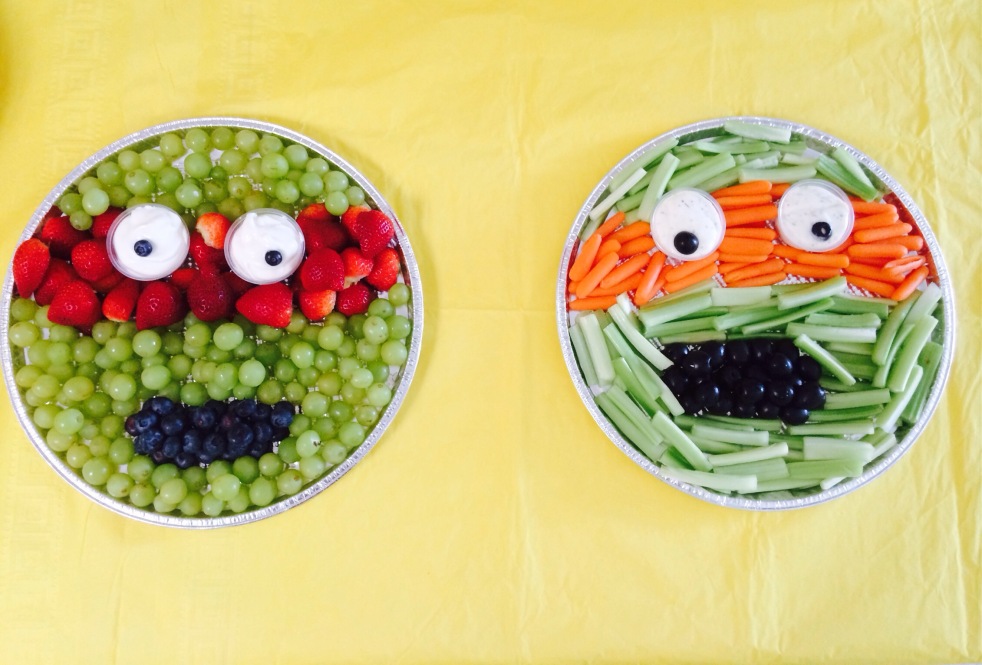 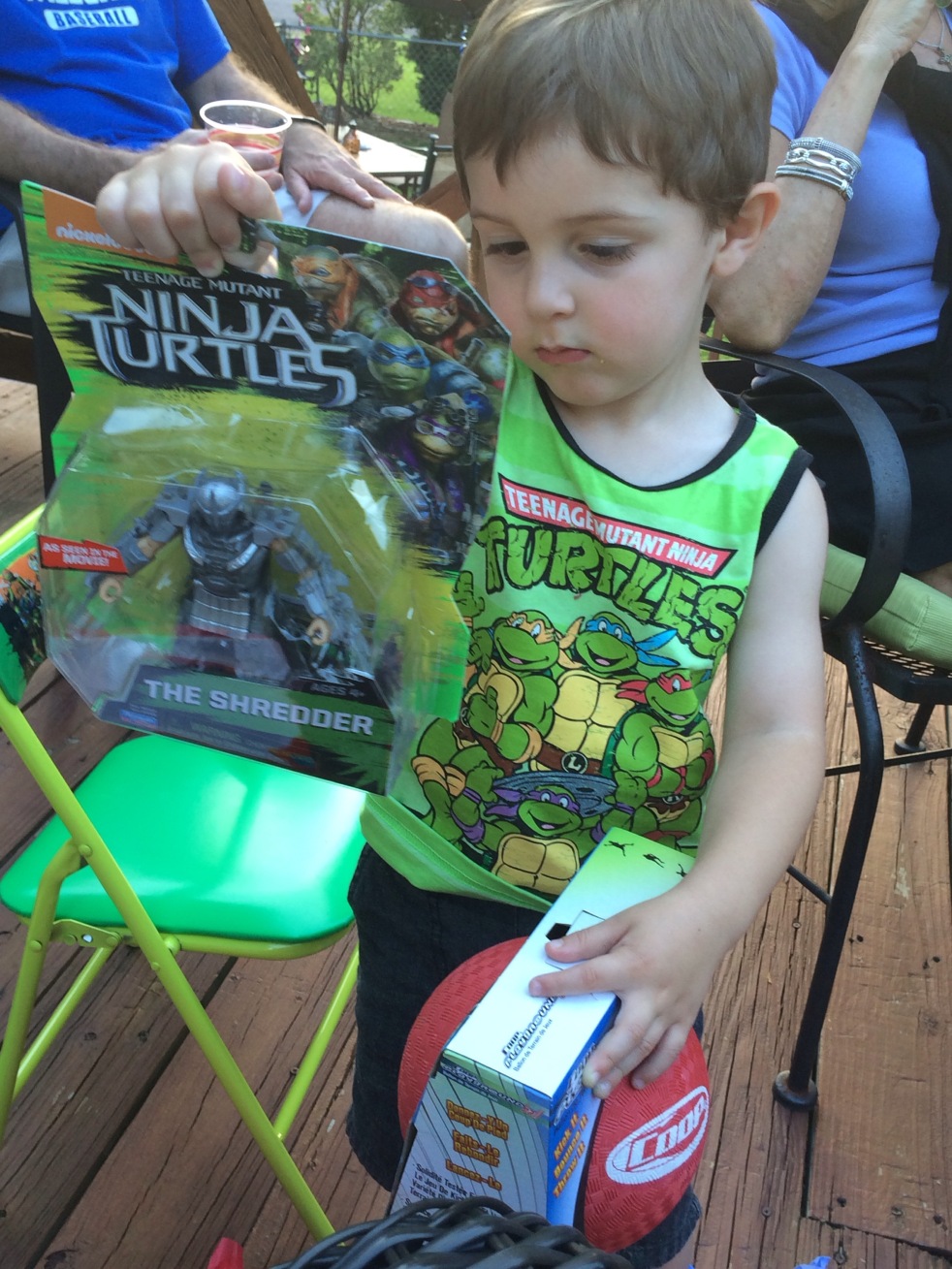 Now, every movement Eli makes, is that of a ninja turtle. Turtle power fo’ life! He loves to pretend fight with his soft (foam) sword and not-so-soft nunchucks. What was I thinking buying those?! 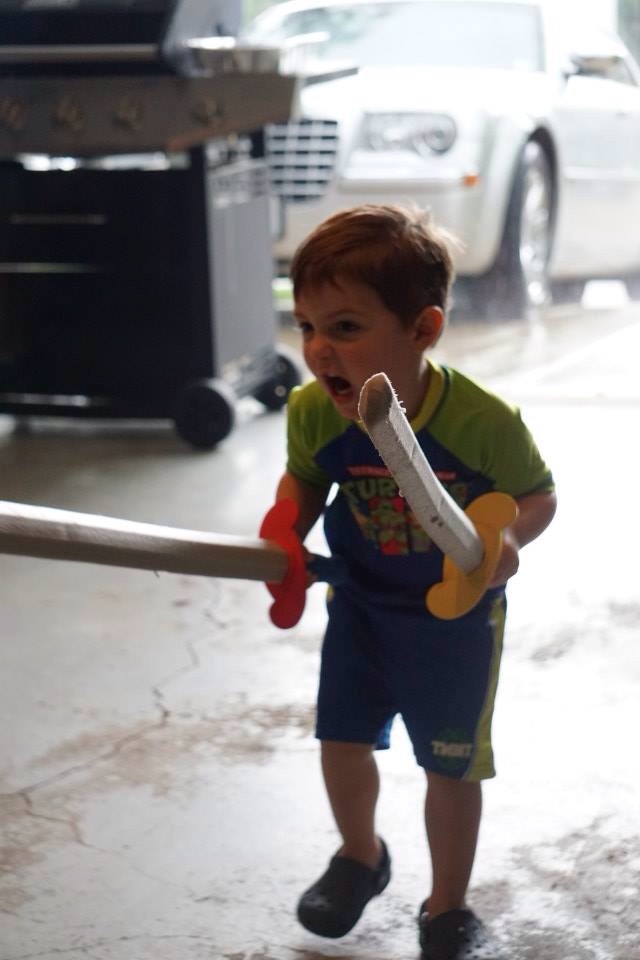 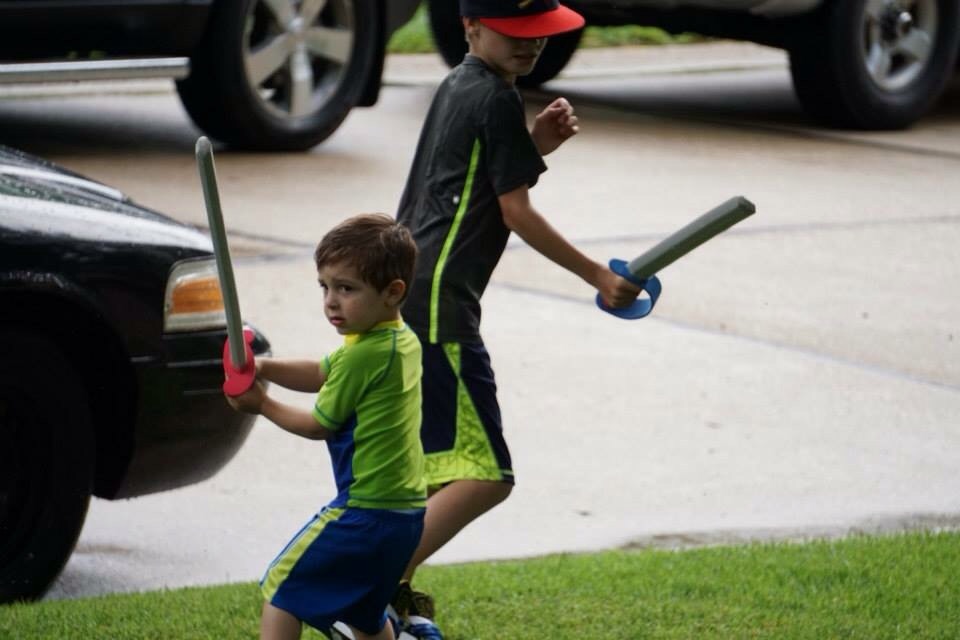 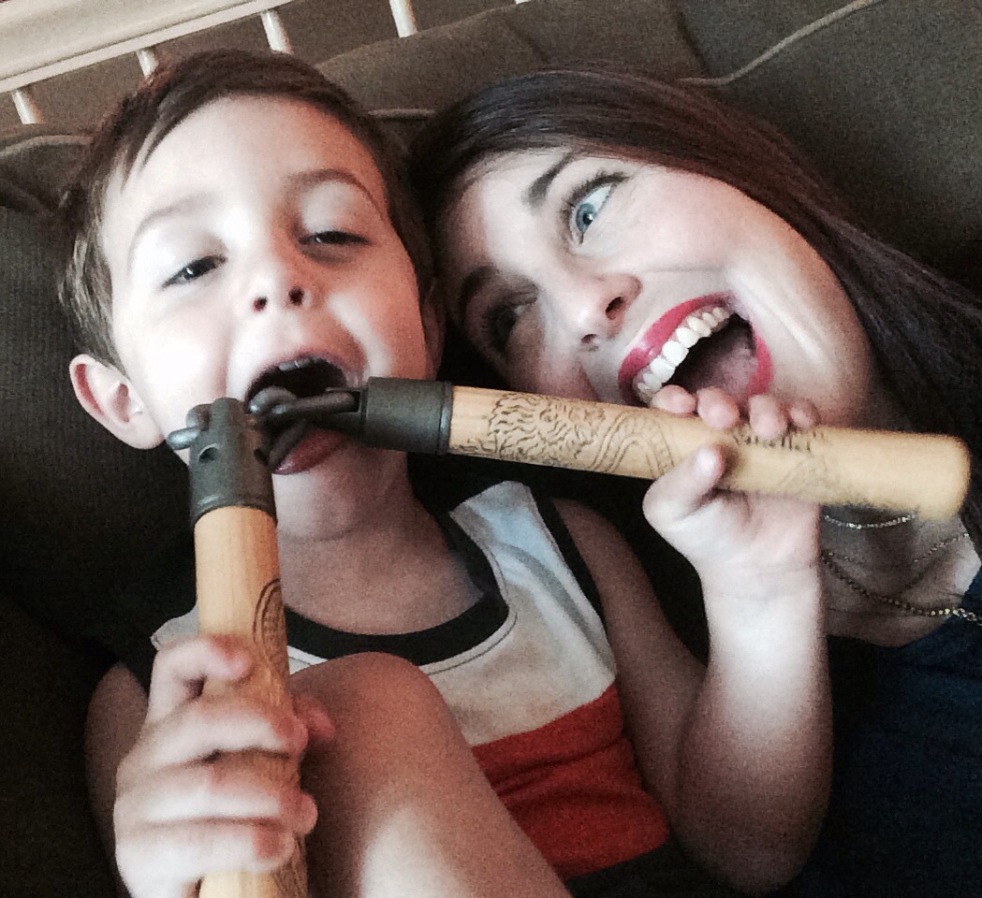 Now, that we are back to reality and Eli isn’t opening a new present every hour, I am getting very nervous for June 26th. That is the day Eli will be getting his tonsils and adenoids removed as well as getting a new set of tubes placed in his ears. I’m constantly being reminded “it’s a simple surgery–you shouldn’t worry so much,” but surgery is still surgery. And it’s my baby who is undergoing it, so I will not calm down! I probably won’t even ease up until he is completely recovered. The recovery process is nerve wrecking in itself. The Doc said he will be in a lot of pain for about a week post-op and I’m already turning into a wreck!

I was 5 when I had mine removed and I still remember how scared I was when they were rolling me to the operating room. And I can’t bear the thought of my baby feeling that way. I need this to be over and done with like yesterday!

So, please say a little prayer for a smooth surgery for Elijah.

Something else that’s not been sitting right with me are my slowly worsening symptoms of FA. I often forget and need to remind myself that Friedreich’s Ataxia is a progressive disease, so when I notice myself less coordinated than before or other health issues coming to surface I should know it’s going to happen, accept it and move on, but instead I get angry with myself. I have the mentality of working hard to improve my symptoms, but I’ve been getting a bit discouraged–it’s tough working against a much powerful source.

I feel myself becoming less coordinated with simple tasks. Picking up a glass of water is harder to grasp. The motion of using my arm to bring the glass to my mouth, drink it, then put it back down takes concentration and forceful muscle control. Using utensils to eat is harder than before. I drop them often and feel awkward and probably look even more awkward cutting with my knife and fork. I am having difficulties swallowing. I seem to aspirate on liquids or that saying ‘it went down the wrong pipe’ is happening more. I’ve been going to speech therapy to help strengthen my throat muscles and learn different ways of swallowing. Crazy, right?! Swallowing liquids and food is usually second nature….now I need to actually think about what I’m doing! My speech tends to slur a bit more, so speech therapy has also been helping me with that.

For months now, I’ve been in constant back pain. The lower right side of my back/hip has been having this pulling and pinching feeling. The pain is more intense when I’m standing straight or taking wide strides while walking. Because of this, I’ve been putting extra pressure on my shoulders to keep me upright while using the walker. Which has led to a pinched nerve in my right shoulder causing tingling and a numbing sensation down my arm. It’s all a domino effect. I know what is soon approaching, but I haven’t had the guts to actually say it out load…I probably need to retire the walker and take more advantage of a wheelchair. I definitely am having a hard time wrapping my head around that realization of PERMANENTLY needing a wheelchair, so I’m going to do my darnedest to keep truckin’ with the walker because that’s the [some what] independence I still have. Unless there’s a lot of walking involved, I have no problem using the wheelchair.

I still see a chiropractor, but the expense of that has not allowed me to go as often as I need, so the back pains and aches are only temporarily relieved when I get an adjustment. I’ve seen a massage therapist a few times, which has also been a big help to work out all those kinks. Again, the expense of getting massages regularly is not top on my money list. Thank goodness for my personal trainer! Not only do I get my work outs in, but she’ll stretch me out and show me different exercises I can do to help relieve he pain.

I sure do sound like I’m being negative Nancy, and that is far from what I want to be…I was having a moment.

I’m a glass is half full kinda gal and I like to motivate others who deal with shit in life, but sometimes I even need that boost of motivation and to be pushed to work harder at kicking FA’s ass. It’s part of life to have downfalls, so it will happen…but it’s also part of life to get back up. With that being said, it’s ok to have yourself a brief pity party; cry, throw things, yell, curse, but then get over it and move on! Seize the day, bitches!

In just one month, I will be heading back to Tampa, FL for my ONE YEAR check-up for the trial study I am in for Friedreich’s Ataxia. A majority of you know I’ve been apart of this study, but for those of you that do not, let me explain…

I signed up to be apart of a research study taking place out of The University of South Florida (USF) in Tampa. It’s a two year trial with a total of 6 visits to USF (5 for me. They combined two visits over a 6 day period to save me one trip). They run their tests every visit to compare from the visit before: a neurological test, blood work, EKG, and echocardiogram. What I’m taking is a supplement, not a drug, called Acetyl L-Carnitine, ALCAR, for short. I take 4 a day, (morning, lunch time, supper time, before bed) twice the normal amount one would take. The primary focus of this supplement is for hopes of improvement of the heart. An individual with FA has a progressive weakening heart versus an individual without FA. Depending on the FA’ers progression rate, depends on how fast their heart weakens. Fortunately, for me, my heart has not weakened to alarming levels, nor had it before I started the study.

The secondary focus of ALCAR, is to see if it improves balance and/or coordination. Clearly, with my slightly worsening coordination, I hate to report that it does not seem to be helping in that category. Now, that’s just my thought and own assessment. I can’t say how I’ve inclined/declined from the medical point of view, so I’ll need to wait for their review. I still have hope for positive changes for the year to come, though! Plus, my heart could still be as strong if not stronger!

When I went to USF in January for my 6 month check-up, my overall results showed no significant changes, besides my strength blowing them out of the water! That sure put a smile on my face!

Regardless if this study improves my symptoms, I’m very happy I’ve had the opportunity to be apart of it. That’s the whole point of being a part of a trial…you never know what the outcome is going to be. But it sure makes me feel good that I can participate for researchers in finding out what works. I also have to give a huge thank you to those of you who have helped me get to this point. Whether it being donations, prayers, positive words or constant support…it’s because of you that I got to be apart of this!

Now, I probably wouldn’t be a guinea pig for something that would have outrageous side effects, but something like ALCAR, I’d jump all over again and again! And there’s extra bonus points for it being in Florida! And my awesome mom comes with me to show endless amounts of support! She’s seriously the best! 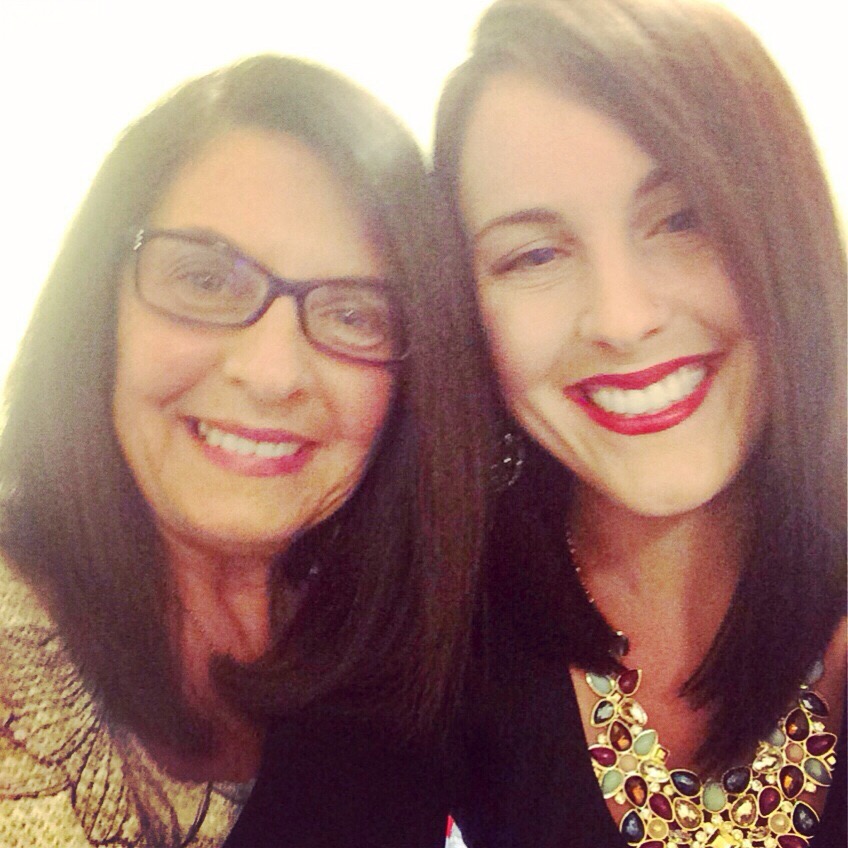 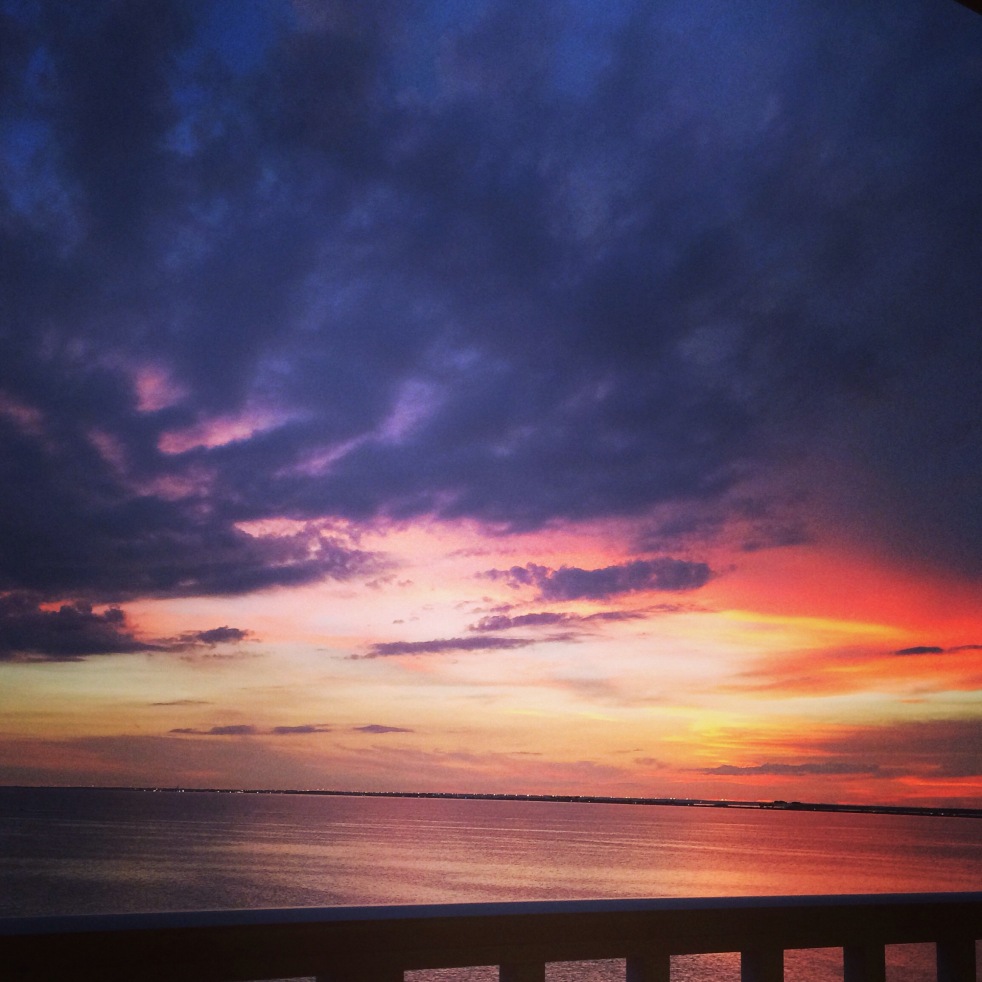 Aaannnnd, to end on a magical note…I sat across from Derek Jeter at a restaurant in Tampa. BOOM!

Once I get my results from this one year check-up, I’ll give you all the deets!

One thought on “Smorgasbord”